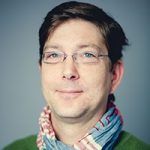 In bright sunshine, communicode's frontend department made its way to Bochum to take part in the 3rd edition of the RuhrJs conference. The venue was in the small but fine rotunda, the so-called former Catholic station, which was built in 1949 for the second Catholic Day.

After a hearty breakfast, the first surprise was hidden in the welcoming speech of the hyper-agile moderator in a panda costume, who bravely defied the high temperatures. In addition to the usual information about the course of the event and thanks to the sponsors, great importance was attached to the explanation of the code of conduct for the event: "No means no"! With all understanding for sensitive topics in the area of interpersonal interaction, a strange feeling crept over me and I thought: Snowflakes in gender madness on stage and old white men in the audience. That seemed very American to me and was reinforced by the clown activities of the 3 MCs during the breaks.

A relaxed Javascript quiz was held between the lectures. Correct answers were rewarded with sweets, vegan if desired. However, these scenes had something carnivalesque about them: 2 pandas and a beau with a smooth mustache practicing throwing camels. What was more pleasant was the warm-up with a short appearance by the project/band { Live : JS }, a collective of digital artists who, as the name suggests, work a lot with Javascript and web technologies. They delivered a convincing electro performance with Gameboys, laptop and corresponding controllers. There were 8-bit retro animations to match. Rather unusual and welcome was the high proportion of women among the speakers, most of whom came from America. This is probably also the reason for the aforementioned declaration of the Code of Conduct.

The subject areas of the lectures were quite broad, you could say diverse. From framework-specific (Angular, React, Vue) to practical (GraphQL) to experimental, such as the lecture on expanding the CSS Paint API or a private project on the subject of wearables. However, an interesting lecture on Human Documentation culminated in politically correct spasms when it was suggested that the use of discriminatory words such as blacklist/whitelist or master/slave should be avoided.

What was unusual was the brevity of the presentations, which were limited to 30 minutes and put some speakers under a lot of pressure. Accordingly, the topics could only be touched upon briefly. The attempt to illuminate a topic more intensively resulted in a steadily accelerating torrent of words, which was difficult to follow. For a final group photo, pixel glasses were distributed at the end, which we should all put on. Back home, my eldest son explained to me what the Bille was all about: the Thug Life Meme.

My conclusion: a nice event, a bit infantile in the moderation and clearly too short in the length of the lectures.

Come to the communicode side
We are always looking for young padawans and masters of their craft.
To our job offers
Share post

Ullrich has been working as a Frontend Developer at communicode since 2008. He studied communication design at the FH-Trier.

SAP Emarsys – what is it all about?

In our article we show how Emarsys works within the SAP landscape and what advantages it brings.
Alexander Thiel
Article from 2/28/2022
insights

communicode wishes you a Merry Christmas

The SAP Connect Remote 2021 was an experience for everyone involved. Time for a recap.
Marek Klein
Article from 11/5/2021

Dear visitor, in order to be able to design the structure and content of our website optimally for you, we would like to use cookies. May we? You can find more information in our Data protection